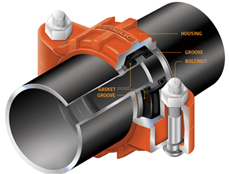 By installing Victaulic, conserve time and financial resources through:

Install up to 10 times faster than other pipe joining methods.

Benefits of the grooved systems:

Victaulic offers a complete line of grooved products for 1/2-24″/15-600mm including couplings, fittings, valves and accessories.

Mechanical equipment vibrates and vibrations make noise. When those noises become cyclic and droning or arrive in sudden bursts when equipment switches on, then there is a problem. Especially in industrial and/or HVAC applications where buildings are occupied.

When placed in a formation of three couplings linked near to each other in close proximity to the source of vibration, Victaulic mechanical pipe systems deliver unsurpassed vibration isolation and sound attenuation characteristics 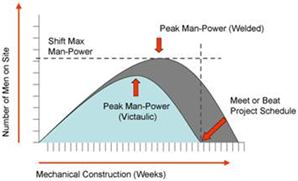 Eliminate the hazards of welding

By utilizing Victaulic mechanical pipe joining systems, contractors can eliminate the hazards of welding on-site. “Welding is among the most dangerous industrial activities. The dangers of welding are fire safety, electric shock, compressed gases, toxic fumes and lack of personal protection for the eyes, hands, feet and body.”

Victaulic couplings were tested at the ATLSS center, a member of the nationally recognized NEES (Network for Earthquake Engineering Simulations), USA testing group, to prove the reliability of Victaulic grooved system components when exposed to seismic movements. Victaulic couplings ranging in size from 4″-16″ (100 – 400mm) were exposed to accelerations up to 50% greater than the Northridge, California earthquake.

The water-filled assemblies were pressurized to 200psi/1375 kPa for the duration of all tests and no pressure loss or leakage was noted during any of the tests. 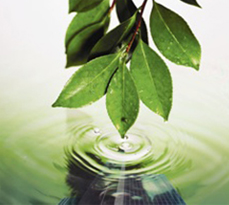 Maintainability of the system

Maintenance, updates and retrofits of grooved mechanical pipe joining systems are as simple as removing and replacing two couplings. Pumps, chillers, strainers and valves can be changed out faster and easier keeping systems running as efficiently as possible.

Better maintenance leads to better building efficiency. The grooved piping system provides a union at every joint for ease and speed of routine system maintanence. Additionally, groove systems allow for system isolation during maintenance which means while one section of the system is down, the rest can remain live.

Elimination of the emission of hazardous weld pollutants

Because of their flameless installation requirements, mechanical pipe joints are inherently safer and easier to work with during system installation and maintenance activities. The flameless fabrication of grooved piping systems make them ideal for HVAC, utility and wastewater applications in highly restricted locations such as trenches, crawl spaces and tunnels, where welding would be particularly hazardous to personnel and property.

Minimizing the potential for contamination under seismic stresses

The integrity of a properly installed grooved piping system minimizes the likelihood of water contamination from leaks, ruptures and other faults resulting from seismic stresses.

The elastomeric gasket used to seal pipe couplings also creates discontinuity in the piping system. This reduces noise and vibration transmitted through piping from pumps, chillers and other components.