Chilled Water Stratified Thermal energy storage (TES) is a technology that stocks thermal energy i.e. Chilled Water, so that the stored energy can be used at a later time for cooling applications.

Thermal Energy (chilled water) is produced during periods of off-peak electrical demand or (usually at night) or simultaneously with ongoing operation and it is collected in a thermal energy storage tank and withdrawn and distributed through the facility during peak rate/demand hours.

Warm and chilled water enters and exits the tank through diffusers located at the top and bottom of the tank. These diffusers are designed to eliminate turbulence and provide a stable, sharply defined transition layer, or “Thermocline”,* thus allowing for the natural stratification of warm water at the top of the tank and chilled water at the bottom.

Density and Kinematic Viscosity plays a significant role in designing the CHWTES and successful stratification.

Thermocline: A thermocline is a stratified region in which there is a steep temperature gradient. The thermocline separates the colder stored chilled water from the warmer return chilled water. It travels vertically up and down during Charging and Discharging Cycles.

The layout and configuration of diffusers in a stratified tank have a significant effect on the formation of the thermocline.

During Discharging Cycle this Thermocline helps to isolate the Stored Chilled Water from the incoming Hot Water from Load and prevents the mixing.

The Designing of the Diffusers plays the most important role in the performance of a Stratified Chilled Water Storage tanks. Proper designing of Diffuser plays a vital role in optimizing the storage capacity and minimizing the blending of chilled water and warm water. Thereby, creating a proper stratification and thinner thermocline.

Two major parameters that are significant in designing of the Diffuser which minimizes the mixing and helps achieving stratification are Reynolds Number and Froude Number. 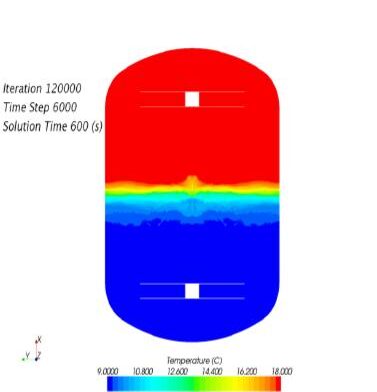 SEVCON is in association with S&G Korea, Specialist Diffuser Designer and Manufacturer to perfectly design the Diffuser as per ASHRAE standards taking in Consideration the Reynolds Number, Froude number to ensure the performance of the tank which it is intended for.

CFD Analysis can be done for further Validation of the back-up time with the supply temperature.

Contact our local Sales Representative for a detailed Presentation Session.